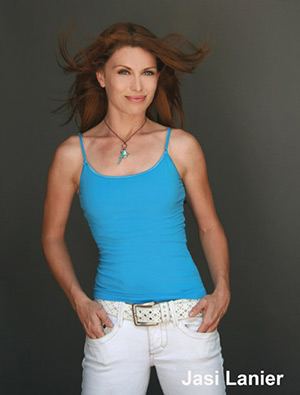 Jasi Lanier was born in Pittsburgh, Pennsylvania and raised in the Carolinas. After several years of acting and modeling on the east coast , she moved to California to pursue her dream to become a stuntwoman. She was inspired by her Uncle Dusty who performed in live stunt shows in the 60s/70s.

Jasi started training at the famed Bob Yerkes backyard in the art of high falls, fights, swords and reactions.

She got her first opportunity there by Stuntman/ Stunt Coordinator John Moio who saw her sword fighting.
He recommended her for a job on the show iCarly doubling a 14-year boy for stunt coordinator, Vince Deadrick Jr. She has since done stunts in over 70 television shows and films.

Her love for stunts has also driven her to serve her community. She has volunteered and served as a department head for Stuntacular, a live Halloween stunt show that was a fundraiser for Make a Wish. Jasi has served as an assistant board member for Diamond in the Raw/ Stuntwomen’s Awards and secretary for the Stuntwomen’s Foundation in the past and is proud to be of service on the current board.